← Say it in The Living Years!
‘I’m only here for my inheritance!’ →

Heaven Bound – On a wing and a prayer 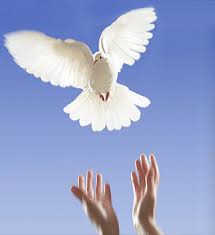 The sun shines over the crematorium and all of the mourners who have gathered for the funeral. Family members have carried the coffin into the chapel. The message to wear a particular colour of tie or item of clothing has been widely acknowledged by the large congregation. The eulogy was well received with the appropriate amount of tears and some laughter. The curtains were left open at the end of the service, allowing some of the mourners to place a rose on the coffin before leaving the chapel. Then, passing the minister at the door to shake hands and say ‘what a wonderful service’, everyone makes their way down onto the flower terrace. The ceremony has gone really well but before the tears have dried on people’s cheeks and they move on to the golf club, community centre or wherever they are heading to, there is one last symbolic gesture that the family have arranged. The dreaded white dove release.

A basket stands at the side of the terrace with a tall man in a dark suit with one, two or maybe three white doves inside. Now if it’s possible, this has become a cue to me to try and stay as far away from what is about to unfold as possible.

The release of the doves is meant as a comfort to the family to help them reflect on how their loved one has left earth and their spirit has ascended into heaven. A release, a letting go of their loved one as they pass into their eternal future. Sometimes the minister might be asked to lead a prayer or say some further words to accompany this aspect of the funeral ceremony.

So why would I take steps to avoid being involved in these moments? It certainly isn’t a lack of desire to commend people into heaven. Far from it. But the truth is that there are some unseen dangers that surround these times…

Thankfully these true stories that I am about to recount are not my first hand experiences but those of a colleague.

Conversations on the flower terrace hush as the dove is gently brought out of the box and held safely as the vicar speaks these comforting words. ‘Ladies and gentlemen, as we release this dove it is a symbolic reminder that our dear loved one has left us and has ascended into heaven, into that glorious eternity, to a place that she will be very welcome….’ As the dove is released the family watch as the bird starts to fly ‘heavenward’. Unfortunately, no sooner than it reaches tree level when a Sparrow Hawk shoots out from its vantage point and hits the dove sending it immediately spiralling downward and lands back on the ground not too far from the watching mourners. As silence engulfs the shocked onlookers one of the mourners, in a rather louder voice than perhaps he meant pipes up saying ‘well it looks like she didn’t make it then!’

Then there was another occasion, same vicar, same location, where following the funeral of a gentleman, his grieving widow is handed the dove to release. How touching that his life partner, his soul mate should be the one to set the bird free. Whether it was the emotion of the day, the focus of all eyes being on her as she carried out this symbolic final act or maybe she was simply scared of holding the bird, that as the vicar leads a simple and loving prayer, the widow holds the bird far too tightly, accidently squeezing all life out of it. So as she opens her hands and gently helps throw the bird upwards it plunges like a stone and lay motionless at her feet.

Thankfully, our eternal welcome into heaven is not centred on any white dove making it off the chapels flower terrace. However, what is abundantly clear to me as I sit in hundreds of living rooms each year is the very real desire to know that their loved one will be welcome in heaven and a genuine and sincere belief that that is where they now reside.

Being able to offer words of comfort in this way to grieving families and speak words of faith, hope and comfort is of overwhelming importance to me and I want to do that with genuinely heartfelt words. So the question I grapple with constantly is this… How do I make it into heaven when I die?

Sometimes I think that the church going community can present heaven as being a place where only a ‘select crowd’ gather. Where the chosen minority are ‘in’ and the majority of Gods created human race spend an eternity away from the amazing place that we call heaven. I don’t see this as being the case. I think heaven will a far more populated location than that. I passionately want that to be the reality. This is so important to me.

In the Bible, Romans 10 v9 says that ‘If you confess with your mouth that Jesus is Lord and if you believe in your heart that God raised him from the dead, you will be saved.’ And we know the words ‘Lord, Remember me’ were spoken by one of the guys crucified alongside Jesus and that prompted the response ‘Today you will be with me in paradise’ – these passages encourage me.

Whilst church attendance on Sundays may be declining across the UK, faith in God is prevalent and remains within the majority of those who I meet and get alongside. This week I spoke with an 86 year old lady who doesn’t attend a local church. However, she said that she prays every day, often starting her prayer with ‘Hello, me again, hope you’re not getting fed up with me, and then asking God to bless, reach out to and look after those that she then lists. She says that she doesn’t understand why God allows bad things to happen to good people, especially the children and that maybe one day she hopes that she will be able to ask him why?’ She said some other things too that she might mention in her prayers. Biblical language and Christian phrases may be absent but I wonder if contemporary words like ‘I hope the big man up there hears and answers my prayers’, have become the modern day equivalent of ‘Lord remember me….’

Now I can hear the theologians shouting where is the repentance, the confession, but I saw faith. A simple, childlike faith held by an ageing lady that is very similar and typical of many who I meet and talk with in my role. My heartfelt prayer and hope is that our loving heavenly father who knows us all so well will find a place in his heavenly kingdom for such people like this lady when the time comes.

And on that day – and please God may that not be for a long while yet, for that 86 year old lady is my mother there won’t be any white doves to release!

← Say it in The Living Years!
‘I’m only here for my inheritance!’ →